I had a few followers ask how come I weren’t posting on the blog the last couple days, and it’s because I were threatened by a Twitter troll.  Don’t think just because some says she’s female that she can’t be dangerous because this here one what went after me were very threatening.

I doesn’t even know how she decided to get things rolling except she got in on a discussion I were having with another person (and that person were a very lovely person what advocates for autistics).

I read some articles about how to deal with cyberbullies, and they says to let people know what happened so that’s what I’m doing on the blog today.  This is just some of what that Twitter troll wrote to me.

So this were all because I were sharing the article Rob McDowall wrote about another a man what calls himself a leading UK autism campaigner.  She defended the campaigner, so I asked another autism advocate about that seeing as Stephy were following her.  I was trying to understand  her thinking.

She got right nasty for asking the question and when I said writing comments like that was like that campaigner, she threatened me.  I said it were a threat. and she much care for that.

When I put her on mute, she kept on so I told my Twitter followers she were going on about me.  I doesn’t ‘creep’ others pages otherwise I would see she’s a troll before.  She’s got lots of people what blocks or mutes her and she don’t like it.  But I weren’t in the know about all that.  When she posted that she were blocked seconds after I muted her, it makes sense to think she were talking about me. So I asked.

She got right upset with my asking and then she sent this message.

She made another threat, so I retweeted it so them others what follows me would know what were going on just like them articles on cyberbullies tells you to do. 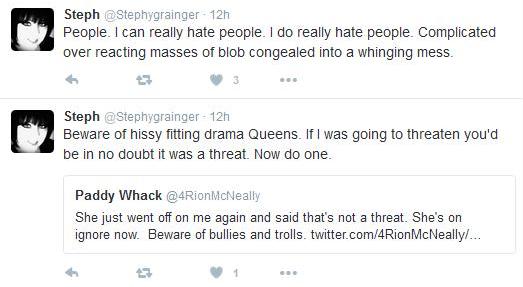 You seen what she wrote about how she hates people?  Always believe what people says about themselves.  So after she kept it up, I had to report her to Twitter. 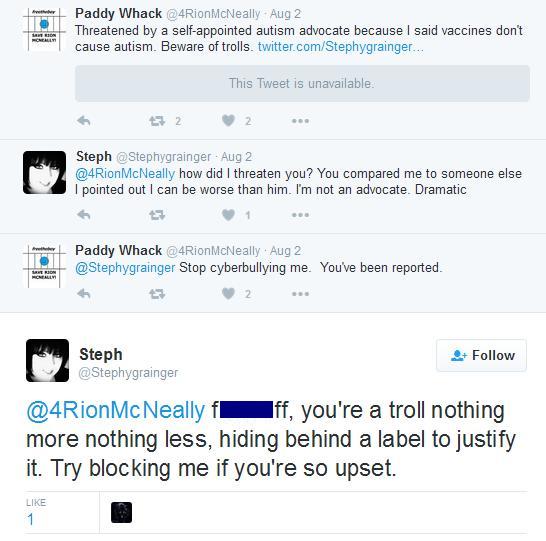 I had to block her but that didn’t stop her from keeping on the way she does.  Twitter friends been telling me after she weren’t get no reaction from me anymore, she started in on others with her rude, bullying ways.  When she gets muted or blocked, she turns into a crusty dragon she does.

So that’s been my experience with this Twitter troll, and I were so shook up by it, I weren’t able to write anything to the #SaveRionMcNeally blog.  I’m sorry for that, and I’ll try not to let Twitter trolls upset me like that again.

People like that woman should be enjoy Her Majesty’s pleasure for what she done to me on Twitter.